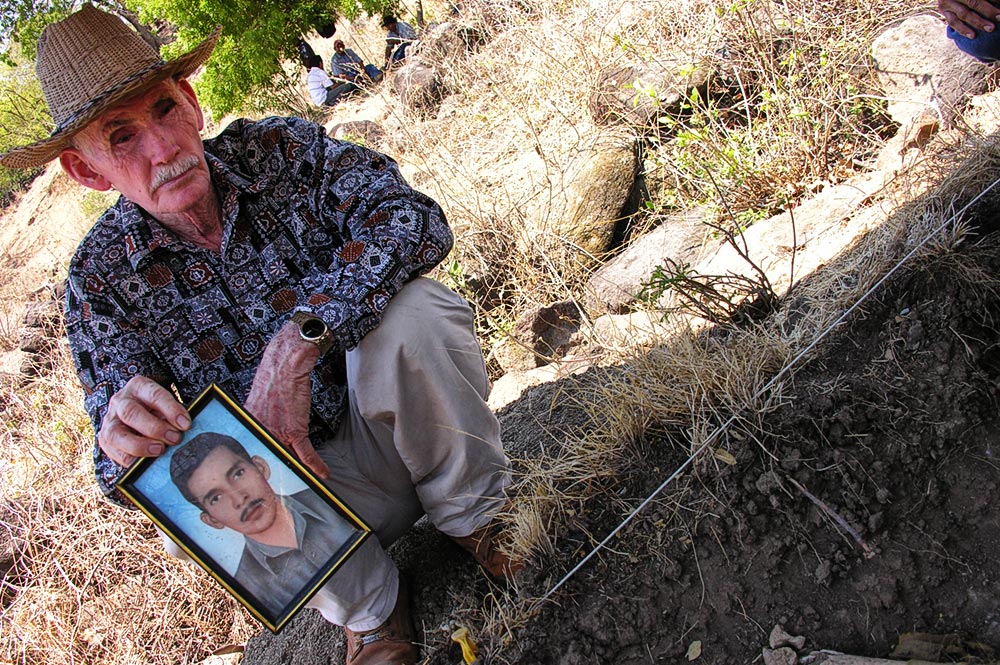 EAAF was asked to work in El Salvador in 1991 on forensic investigations related to the civil war in the country (1980-1992), during which an estimated number of 80,000 people died. To date, EAAF continues collaborating on such investigations on a regular basis with different NGOs and governmental organizations such as the National Commission for Tracing Girls and Boys Missing during the Internal Armed Conflict (CNB) and the Institute of Legal Medicine. EAAF provides advice on investigations into armed conflict cases and on the strengthening of forensic services by offering training in forensic anthropology and forensic genetics, as well as support in the construction of databases. Furthermore, EAAF works on the search for Salvadoran missing migrants outside the country.

The first task commissioned to EAAF was the exhumation and analysis of the remains of victims of the civil war and was carried out in 1992, in coordination with the human rights NGO Tutela Legal, the legal office of the Archbishop of San Salvador (now, Tutela Legal “Dra. María Julia Hernández”) and the United Nations Observer Mission in El Salvador (ONUSAL, 1991-1995).

The Amnesty Law passed in 1993 prevented the investigation and judgment of many of the serious human rights violations committed during the civil war.

EAAF resumed its work in the country in 2000 in coordination with other NGOs, such as Center for the Promotion of Human Rights “Madeleine Lagadec” and Pro-Búsqueda (a civil society organization dedicated to the search for disappeared children or children involuntarily separated from their families during the armed conflict). Since then, EAAF has managed to carry out exhumations based on humanitarian grounds in order to identify and restore the victims’ remains to their families. The state, through its National Commission for Tracing Girls and Boys Missing during the Internal Armed Conflict (CNB), joined its efforts in this work. EAAF has worked from 2013 to date on those cases in which the CNB investigations have concluded that the missing children had died as a result of the armed conflict.

In 2016, with the abrogation of the Amnesty Law, there was a new chance for conducting criminal investigations within the national system of justice. In this new context, EAAF took up again the investigation into the El Mozote massacre, this time with the responsibility of monitoring the exhumations ordered by the Salvadoran judicial system and commissioned to the Institute of Legal Medicine (IML).

According to investigations carried out by different sources, the Salvadoran army killed approximately 1,000 civilians who lived in the village of El Mozote and five other neighboring villages in the department of Morazán, making it one of the largest massacres in contemporary Latin American history. The results of the forensic work carried out by EAAF in 1992 were incorporated in the Report of the Commission on the Truth for El Salvador (1992-1993). At that time, at least 143 remains were recovered, 131 of which corresponded to children under 12 years of age. Work on the El Mozote case was taken up again in 2000. The Inter-American Court of Human Rights, in its 2014 ruling, incorporated the conclusions of EAAF’s forensic work.

In 2019, the national judicial system once again requested EAAF’s support in monitoring the exhumation carried out by IML of 11 adults and children who were victims of a grenade explosion in Cerro Ortiz, the site where the El Mozote massacre began and where exhumations had not yet been carried out. The remains were transferred to the IML laboratory, where the subsequent forensic analyses will also be done under the supervision of EAAF.

The El Calabozo massacre occurred between August 17 and 25, 1982, in the department of San Vicente and, according to the Report of the United Nations Commission on the Truth for El Salvador, “there is sufficient evidence that on 22 August 1982, troops of the Atlacatl Battalion deliberately killed over 200 civilians —men, women and children— who had been taken prisoner without offering any resistance.” Until 2018, no burial site of the victims of the El Calabozo massacre had been found. Therefore, members of EAAF traveled to El Salvador at the request of two NGOs, CDH and CRISTOSAL, engaged in promoting the criminal prosecution of the massacre and the exhumation and identification of the remains of six victims buried in a common grave. The remains were identified and restored to their family members.

Additionally, El Salvador is one of the countries that forms part of the Border Project, led by EAAF. This initiative was devised to address the crisis of missing migrants along the migrant corridor running through Central America, Mexico and the United States.

The Border Project has the objective of creating a regional mechanism to significantly improve the search for missing or disappeared migrants among unidentified remains through the sharing of forensic information at the regional level and the improvement and adoption of forensic best practices.

One of the primary tools of the Project is the creation of forensic data banks of missing or disappeared migrants. In the case of El Salvador, the Forensic Bank began its work in August 2010, and includes the data supplied by the Ministry of Foreign Relations, the Committee of Relatives of Missing Migrants (COFAMIDE), the Ombudsperson for the Defense of Human Rights (PDDH) and EAAF.

Statistics from the Salvadoran Border Project:

For more than 20 years, EAAF has worked to strengthen the forensic capacity of the Supreme Court’s Institute of Legal Medicine (IML), under the purview of which a Unit of Forensic Anthropology was created. Between 2017 and 2019, Salvadoran professionals were selected to participate in EAAF’s Latin American School of Forensic Sciences and Human Rights, which offers theoretical and practical training in disciplines related to forensic investigations. The three-week multi-disciplinary training takes place in EAAF’s International Training Center in Forensic Sciences in the city of Buenos Aires and has the support of the Argentine Fund for South-South and Triangular Cooperation (FO.AR) within the Argentine Ministry of Foreign Affairs, International Trade and Worship.

In addition, in 2017, members of EAAF’s forensic genetics laboratory provided a specialized one-week course to professionals from the IML on methods, protocols and statistics related to the identification of missing or disappeared persons. The course included practical classes on techniques for DNA extraction.